Choy Lee Fut weapons are divided into several categories. These are long range, mid range and close range. This is further subdivided into hard, soft, heavy, light, flexible, double and combinations of weapons. 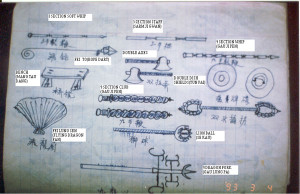 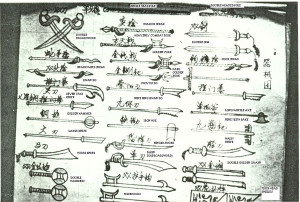 First category weapons such as the pole group are also divided into single headed (dan tau) and double headed (seung tau), hard and soft. The single headed pole generally referred to is usually tapered, whereas the double headed pole in choy lee fut has a parallel shaft.
The reason why the pole is the first weapon taught in the choy lee fut system, apart from the legacy of famous shaolin pole techniques, is that the student must first strengthen up the wrist and forearm  and train all techniques developing power utilising the various ‘horse stance’. If the wrists are not ‘conditioned’, there will be no power to utilise the techniques at more advanced levels of weapons training. Also most of the later Choy Lee Fut “pole” type weapons, such as the spear, gwan dao, etc., have techniques based on the fundamental pole techniques. The pole can be utilised as a single headed weapon or a double headed weapon. Spear techniques are also derived  from the pole. In choy lee fut all spear forms are really called spear poles. Whereas the pole is generally  regarded as a ‘hard’ (yang) weapon, the spear is ‘soft’ (yin). Movements with the spear are executed with ‘yin’ power. This is power that is developed by very fast movements akin to a bullet i.e. high velocity generates power. Even though the spear, is basically a pole with a sharp barb on one end, it also uses the single and double headed techniques from the fundamental pole.
Even the heavy weapons such as the gou wan dai dao and kwan dao (9 ring type kwan dao) utilises pole techniques. These weapons also have a large knife blade which can be used to cut, slash, hack and stab. As with the primary forms in Choy Lee Fut such as 5 wheel horse (ng lun ma) and 5 wheel fist ( ng lun choy), the principles found in these two fundamental forms are also used in weapons training. 5 wheel horse trains the student to move in a linear direction before moving to more circular movements later on in 5 wheel fist (ng lun choy).
The principles are also passed on to weapons levels i.e linear to circular. For example the first weapon taught in the Choy Lee Fut weapons system, single and double headed pole (seung gaap dan tau gwan), teaches the practitioner linear (single headed pole) techniques, then progresses to circular (double headed pole) techniques. This basic weapon also utilises the bakgwa techniques of the choy lee fut system i.e. 8 directions. This is a fundamental principle of all Choy Lee Fut techniques whether training ‘empty hand sets’ or using weapons. There are about fourteen different pole/spear forms underlying the importance of the Shaolin pole.
Mid range weapons such as the ‘darn dao’ or sabre also use the bakgwa techniques in the Choy Lee Fut system. the ‘darn dao uses more elbow, shoulder movements to slash, cut, slice and hack whereas  the gim is more refined in that mainly wrist movements are used. These techniques initiating from the wrist are used to allow the gim to penetrate vital organs and accurately pinpoint pressure points to overcome the opponent.
Most mid range weapons in Choy Lee Fut embody techniques from either the ‘darn dao’ or the ‘gim’. Included in this category is a weapon called the ‘gaan’.When using this weapon, techniques are called upon from many of Choy Lee Fut’s other weapons such as the ‘darn dao’, ‘gim’ and short pole (chai mee gwan or monkey pole).
Close range weapons such as the fan originated from the scholastic class within china. This group of people were more “learned and gentlemanly like’ so did not want to appear in public bearing arms. But underneath the exterior, a person knowing how to use a fan properly, could utilise this seemingly unnoticed implement to devastating effect. Fans sometime had hidden or sharpened ends which were razor like sharp and could be used to attack the pressure points on a body. The sharp end of a closed fan could also strike vital areas such as the solar-plexus, throat, stomach, top of the head, and around the groin area. When opened with the speed of a cobra spitting venom, the egdes or fan blades could slice open areas such as the throat or face. Other areas  vulnerable to attack were the temples, back of the knees as well as the side of the throat. A closed fan could also be used to trap an opponents limbs, by using kau or hook techniques. In choy lee fut the fan is also used as a prelude to learning the gim as both weapons utilise techniques that originate from the wrist.
Daggers is another close range weapon that is used as a double weapon. Most techniques involving daggers benefit from the fact, that one hand is used to parry while the other is used to attack.

The weapons forms covered in the basic curriculum are:

Other weapons forms are also taught during the curriculum.